How Many Smartphones Are In The World?

April 2020 Mobile User Statistics: Discover the Number of Phones in The World & Smartphone Penetration by Country or Region.

Menu: Jump to a section

We begin by exploring the weekly updated figures on the number of phones, which is divided into smartphones, then smart and feature phones. This separation allows us to get an idea of the total number of all cell phone users in the world, and also the adoption of smartphones only.

How Many People Have Smartphones In The World?

According to Statista, the current number of smartphone users in the world today is 3.5 billion, and this means 45.04% of the world’s population owns a smartphone. This figure is up considerably from 2016 when there was only 2.5 billion users, 33.58% of that year’s global population.

How Many People Have Mobile Phones In The World?

In 2020, including both smart and feature phones, the current number of mobile phone users is 4.78 billion, which makes 61.51% of people in the world a cell phone owner. Feature phones are the basic cell phones without apps and complex OS systems, more prominent in developing countries.

The machines have officially taken over with almost 1.6 billion additional mobile connections than there are people – To put this in perspective, since the cell phones inception in 1973, mobile device connections have surpassed the number of people in the world, making it the fastest-growing human-made technology phenomenon ever.

How Many People Have Mobile Devices In The World?

According to GSMA real-time intelligence data, today, there are 5.28 Billion people that have a mobile device in the world. This means that 67.95% of the world’s population has a mobile device. Back in 2017, the number of people with mobile devices was only 53% and breached the 5 billion mark. Statista predicts that by 2023 this number of mobile device users will increase to 7.33 billion.

How Many Mobile Connections Are There Worldwide?

According to GSMA real-time intelligence data, there are now over 9.82 Billion mobile connections worldwide, which surpasses the current world population of 7.77 Billion implied by UN digital analyst estimates. This data means there are 2.05 billion more mobile connections than people worldwide.

It’s important to state that not every person in the world has a mobile device. We’re talking mobile connections that come from people with multiple devices, and a fraction with dual SIM’s or other integrated devices like cars.

As you can see from the data above, ownership is growing at an extremely rapid rate with almost half the planet owning a smartphone and two-thirds with a mobile device. Below you can see how the number of smartphone users has boomed, from 2016-2020, there has been a 40% increase in the number of people with a smart cell phone. Source: 3. Statista

Statista predicts substantial growth for all cellular-enabled phones, tablets or IoT devices on a global scale. The company’s data sources estimate that in the next three years, we’ll see the number of mobile device users increase from 5.17 to 7.33 billion. Source: 5. Statista

By 2025, 72% of all internet users will solely use smartphones to access the web

Somewhat of a bold prediction, but the World Advertising Research Center believes that due to the growth of smartphone adoption, 72.6% of all internet users will be accessing web pages via a smartphone. To put this in perspective, 57.14% (2 billion people) of the global smartphone user base exclusively access the internet today through their smartphone. If you look at the phone penetration by country data in the next section of this report, you’ll see that there are still many countries with vast populations and low smartphone adoption. Source: 6. WARC

The adoption of smart cell phones isn’t the same in every country or region around the globe. Below we show the latest smartphone penetration data, showing population versus the number of smartphone users by country.

Tip: Filter table columns by clicking on the headings

73.47% of people in the top 10 developed countries own a smartphone

According to the latest Newzoo statistics featured above, 26.53% of people in the top 10 developed countries don’t own a smartphone, wither having a feature phone or nothing at all. Examples of countries included in this are the UK, UAE, United States, France, Spain, and Canada. Source: 8. Newzoo

74.61% of people in the top 10 developing countries don’t have a smartphone

Another spin on the Newzoo data is that 25.39% of people in developing countries have a smart cell phone in their possession, leaving 74.61% of the population without one. Examples of countries included in this are Nigeria, Pakistan, Bangladesh, Indonesia, and India. Source: 8. Newzoo

According to a recent report by Newzoo, this is the global split of smartphone users by region, much like the breakdown by a country above, China takes the lion’s share of active users.

When reviewing the country data above, it’s clear that not every person is likely to have a phone for many reasons, especially in developing countries. For instance, when analyzing PEW Research data from India, they found that 40% of people own a feature phone (not a smartphone) and 35% of the population don’t have a mobile device. Similar trends match the table above for Nigeria with 17% without phones, 44% with feature phones and Indonesia 29% without, 28% feature phones only. Source: 9. PEW Research Center

14.28% of people in the world physically can’t own a cell phone

Another important fact to point out is that it’s estimated that 14.28% of the current world population (1.1 billion) doesn’t have access to electricity – resulting in the fact they couldn’t even charge one if they owned it. Source: 10. Quartz

Countries like China, India, the US, Brazil, and Russia have the most cell phone subscribers.

Together, these top five countries have over 1.64 billion active mobile users, which is huge for the economy. The mobile industry relies heavily on tariff services through cell phone subscriptions for mobile operators to make money. China, a country with 851 million smartphone users, has over 850 providers to choose from! Source: 8. Newzoo

When looking at how many people have smartphones in the world over time, the average global figures have increased to 45.1% at the start of 2020. This figure is up from 33.5% back in 2016, a substantial increase in a few short years. Mobile subscriptions are still growing faster than the world’s population. Source: 7. Statista

It’s clear from the worldwide smartphone penetration data above that its adoption correlates closely to markets with greater affluence.

In this section, we explore the smartphone penetration of the U.S. market in terms of the number of phones, the demographic adoption, and manufacturer market share.

How Many People in the US Own a Smartphone?

Statista data suppliers estimate that the USA has 272.6 million smartphone users in 2020 and is ranked the 4th highest country for the smartphone to population penetration, at 79.10%. It only falls behind the UK, UAE and Mexico in the number of people owning a phone.

The United States has been a thriving smartphone market with steady increases in people ditching feature phones. Back in 2010, there were only 62.6 million smartphone users in the US, and the current figures quoted above have smashed all estimates. Source: 11. Statista

Smartphone ownership in America is comparatively consistent across surveyed areas such as gender, ethnicity, and regional development. The most significant contrasts are presented where age, income and education are studied. For example, 94% of 18-29-year-olds have a smartphone, whereas only 46% of the 65+ age group has adopted it.

Another contrast is where 67% of people that earn less than $30,000 a year own a smartphone. Further to this affluence data, 57% of Americans with less than a high school graduate attainment have a smartphone.

The statistics below show the market share of the top 6 leading smartphone OEMs in America. The stat counter data from January 2020 shows significant market share figures from Apple (55.55%) and Samsung (26.95%), which combine to 82.50% of the smartphone market.

To get an idea of the values you can get when selling your old phone in the US, check out our latest phone trade-in pricing below:

TRADE IN YOUR PHONE 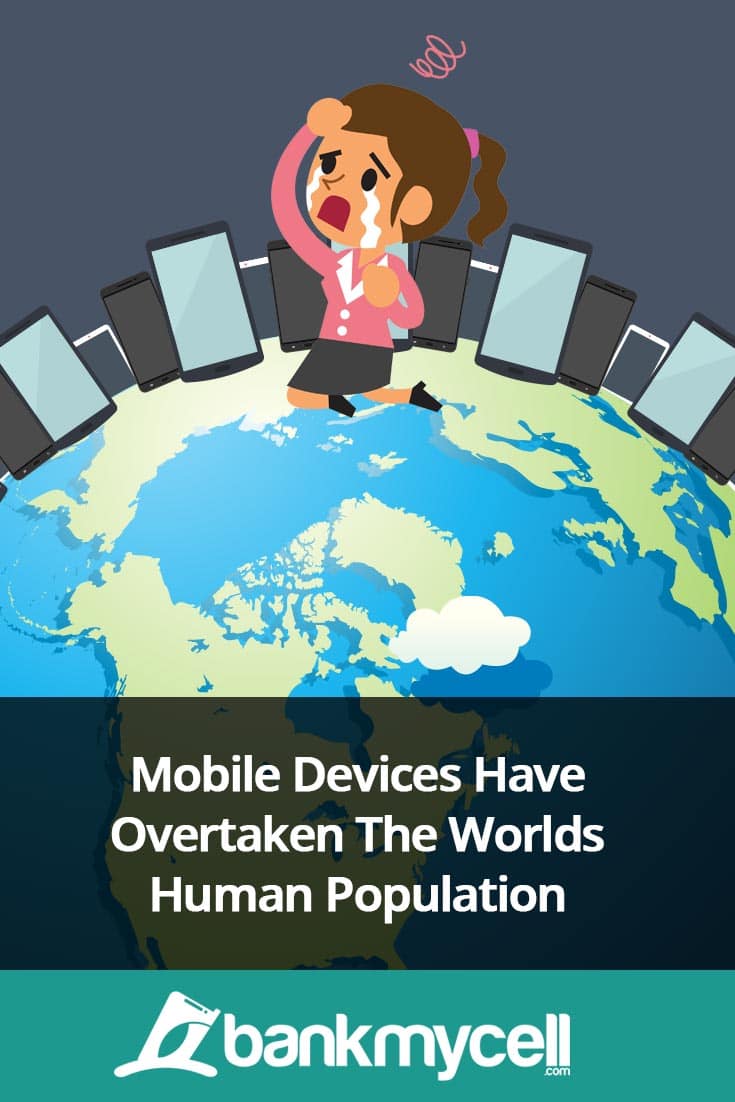